All the King’s  Horses: The Story of Gwynn Oak Park
is a documentary which chronicles the efforts of many ordinary, everyday people
to desegregate the privately owned Gwynn Oak Park during Maryland’s racially charged
and turbulent civil rights era.   Buried in the memories of old timers and elder
statesmen are the mental images of the past, the long forgotten struggles for
equality for African-Americans in Maryland.  The words: Civil Rights movement
all too often evoke thoughts of the deep south-Alabama, Mississippi, Georgia.
But little known to most and all too true for many are the conflicts that took
place right here in Maryland.

The year 1963 was a restless year throughout the state of Maryland.
From Baltimore where Morgan State College students were staging protests at the
Northwood Movie Theater to the bucolic Eastern Shore town of Cambridge the tides
of racial unrest were rising.   Blacks were not alone in their struggles.

Marching side by side and arm in arm were Whites, Jews, Blacks, priests,
rabbis, ministers, businessmen, students, teachers,  husbands, wives,  and
children.  Many of these seemingly unlikely protestors were not the targets of
discrimination. Yet they left their comfortable homes and took time out of their
busy lives to join the struggle-to be yelled at, jeered, spit upon and even
beaten.  This documentary attempts to capture the essence of not only their
struggle but their motivation-the why.

Film makers Pete and Beverly O’Neal have amassed over 15 hours of
eyewitness accounts and personal narratives of those involved in the
desegregation of the park.  All sides are presented-from those who were allowed
in,  to those who were not allowed in.  Original  photographs from the now
defunct News American newspaper, newly uncovered film footage  and artifacts
stored in garages and basements  for the past 50 years provide a clear account
of all the players. Exactly who were the people involved, where were they from
and what was their motivation?

All the King’s Horses: The Story of Gwynn Oak Park documents the good
times surrounding the park and the bad times.  The last of those wonderful
Baltimore amusement parks was a prize to be won-the brass ring on the carousel.
But the prize would not last much longer.  Bankruptcy and Hurricane Agnes were
catastropic for the park.  This project also  recounts  the end of the park and
events which may have precipitated its demise. 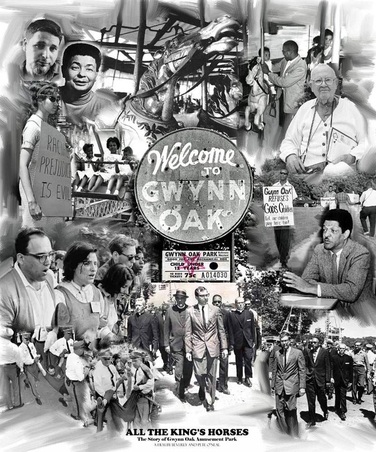 CONTACT Pete O'Neal at cameramanpete@yahoo.com to schedule a screening at your school or church or other venue.