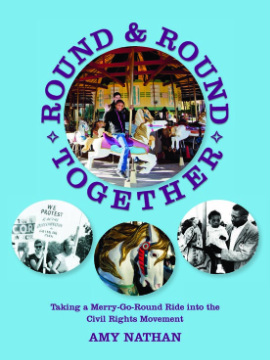 In the book ROUND AND ROUND TOGETHER, Amy Nathan presents the history of the nearly decade-long effort to end segregation at Gwynn Oak Amusement Park, weaving the story of the park and the protests there into the story of the civil rights movement as a whole, providing an overview of the struggle against Jim Crow, both in Baltimore and elsewhere. The Baltimoreans who kept adapting their strategies over the years at Gwynn Oak were typical of civil rights volunteers in other cities and towns, all chipping away as best they could to bring about an end to an unjust social system.

Gwynn Oak Amusement Park opened in 1894 and from the start was a segregated park. Formal protests began there during the summer of 1955, shortly after Baltimore became one of the first Southern cities to comply with the Supreme Court’s Brown v. Board of Education decision and officially ended segregation in its public schools in the fall of 1954. Protests continued at the park from 1955 until the summer of 1963, when two massive protests at the park on July 4 and 7, 1963, led to negotiations with the park’s owners, and an agreement to end segregation . The first day Gwynn Oak was open to all was August 28, 1963.

Note: The book has a comprehensive Bibliography listing books and articles on Gwynn Oak and on Civil Rights in Baltimore and elsewhere.
ROUND AND ROUND TOGETHER is available at
the Enoch Pratt Library and in branches of the Baltimore County Public Library.

For more about the story told in ROUND AND ROUND TOGETHER, and to read the first chapter FREE OF CHARGE, check out these links:
First chapter

YouTube Video
Sharon Langley was the first African American child to go on a ride at Gwynn Oak Amusement Park on August 28, 1963 , when she took a spin on the park's merry-go-round, with her father by her side. Her story is told in ROUND AND ROUND TOGETHER.  A photo of her with her father appears on the cover of  ROUND AND ROUND TOGETHER. She is coming to the Opening the Gates celebration on July 7th — from Los Angeles, where she is an elementary school administrator. 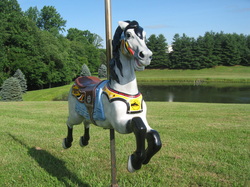 This is the horse Sharon Langley rode as a young child on August 28, 1963—Gwynn Oak's first day without segregation. It is usually on the Carousel on the National Mall in Washington, D.C., whose current owners have now dedicated this horse as their "freedom" horse, decorating it with the names of people and groups who worked to end segregation and discrimination. On the bridle are inscribed "Gwynn Oak" on one side of the horse's head and "8-28-63" on the other. Sharon Langley's name is inscribed on a brass plate attached to the back of the saddle. The horse is coming to the July 7th Opening the Gates commemoration at Gwynn Oak, to be put on display for the day before it returns to the National Mall to continue to ride round and round on the merry-go-round that was located at Gwynn Oak Amusement Park 50 years ago. 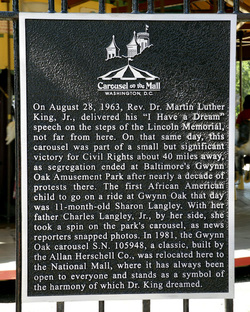 The historical marker that has been installed on the fence around the Carousel on the Mall — the merry-go-round that was at Gwynn Oak Amusement Park back in 1963.


The story of how this merry-go-round made its way to the National Mall is told for the first time in the book ROUND AND ROUND TOGETHER.